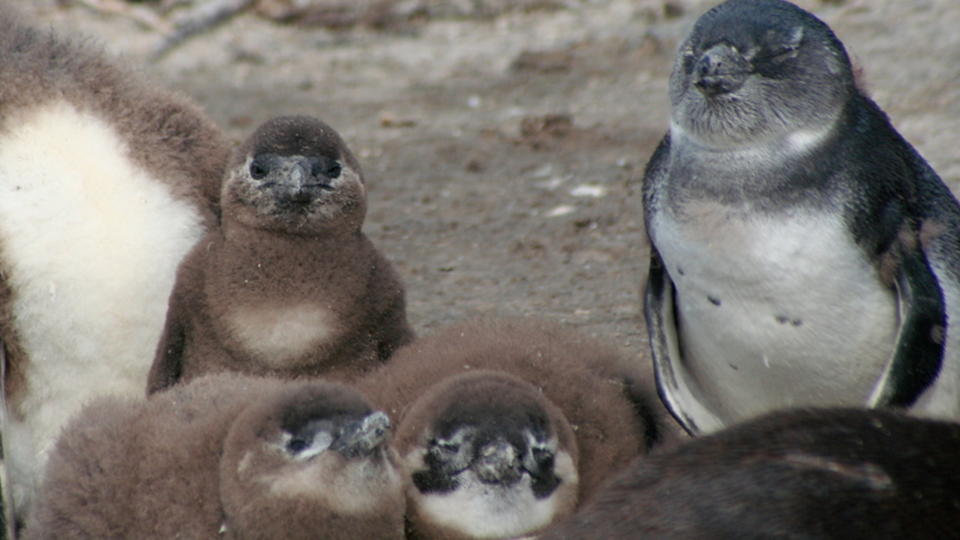 African penguins, like the ones here on exhibit at the Academy, are in trouble in the wild. Between 2001 and 2013, their populations declined by over 70%, landing them on the endangered species list. How can we protect them? Scientists around the globe are racing to develop effective conservation measures before the penguins disappear.

One team of scientists and conservationists have rescued abandoned penguin chicks on the beaches of southern African and on islands just off the coast. Chicks typically fledge, leaving the nest and their parents, at anywhere from two-to-four months.If they don’t become self sufficient before their parents begin to molt, it can spell trouble for the chicks. During the 21-day molting period in which adult penguins lose and regrow their feathers, the parents’ feathers no longer have the waterproofing necessary to dive for food. If there’s not enough food to go around, penguin chicks will starve.

The Southern African Foundation for the Conservation of Coastal Birds (SANCCOB) recovers these abandoned penguin chicks and cares for them until they can be reintroduced into breeding colonies. To determine the success of this program, researchers documented the care, release, and survival of more than 840 and 480, in 2006 and 2007 respectively, hand-reared chicks.

Their efforts were successful! Publishing this week in PLoS ONE, the team reports that post-release juvenile and adult survival rates were similar to recent survival rates recorded for naturally-reared birds. By December 2012 researchers observed that 12 birds had bred, six at their colony of origin. The authors suggest that hand-rearing penguin chicks may be a useful conservation tool to limit mortality and to strengthen the population at specific colonies.

“Over the last decade, food availability has decreased dramatically for penguins breeding in Western South Africa and many birds now struggle to rear their chicks before they need to initiate molt,” says Richard Sherley of the University of Cape Town, lead author on the paper. “Hand-reared chicks can sustain populations in the short-term and help us understand how we might create new breeding colonies in areas of higher food availability.”