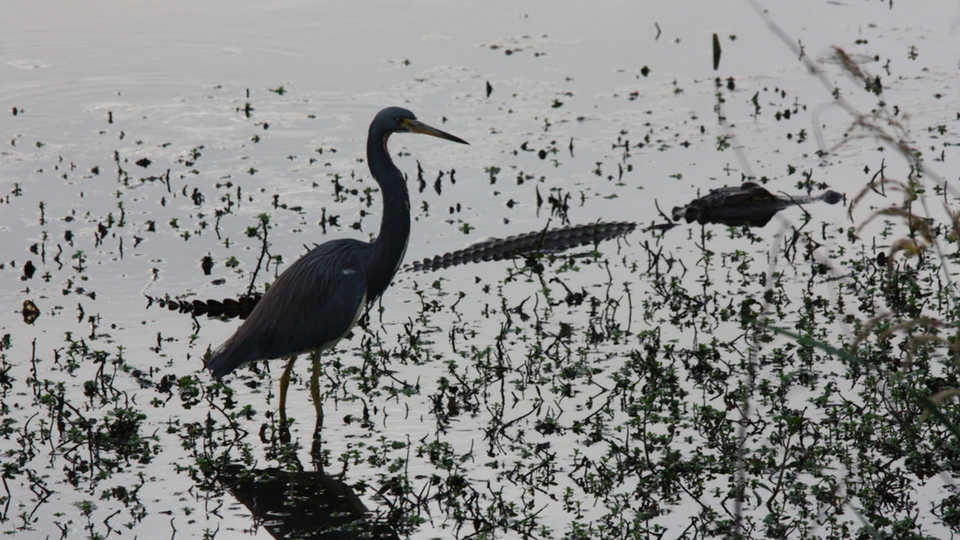 The natural world is all about relationships. Sometimes both parties benefit, and sometimes only one species benefits, either harming or not bothering the other at all. Sound familiar?

We’re still learning a lot about symbiotic relationships in the wild. A study published today in PLoS ONE examines the relationship between American alligators and wading birds in the Florida Everglades. For years, scientists understood that these long-legged birds—herons, egrets, ibises, storks and spoonbills—bred and nested near alligators to protect their eggs from predators such as raccoons and opossums. For the wading birds, the benefits of nearby alligator bodyguards were clear to researchers: “For many bird species nest predation is the greatest threat to reproductive success,” according to the new study. But what of the alligators—what do they get out of the relationship, if anything?

A team of scientists from the University of Florida decided to find out. They studied 20 adult female alligators that live near breeding bird colonies and 19 that don’t. The team set out at night to capture, measure, weigh, sample and release the large reptiles (I’m sure I’m leaving out some very interesting details here). They collected their data in June of 2013 and 2014, after the birds had generally finished their chick-raising.

The results were stunning: the alligators near the breeding bird sites were healthier—more than 45 percent larger and healthier than alligators who don't live near birds. Since these wading birds often lay more eggs than they can successfully raise, they often adjust brood size, ejecting one or two chicks (alive or dead) from their nest. The team believes that the alligator bodyguards benefit from this practice: the chicks provide a source of food as payment for the protection.

“Our study is the first to demonstrate a mutually beneficial relationship between nesting birds and a crocodilian: nesting wading birds provide nutrition for alligators that, by their mere presence, create predator-free space for birds,” explains lead author Lucas Nell. “Crocodilians and nesting birds co-occur throughout the tropics, so these may be globally important ecological associations.”