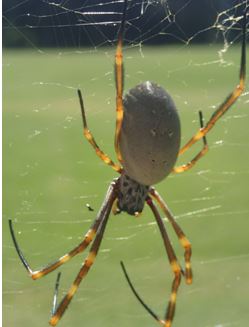 Are you afraid of spiders? Well, if you live in a city, this won’t come as welcome news. It turns out that big-city life is good for spiders—they’re not only getting bigger, they’re also producing more offspring. At least that’s the case with orb-weaving spiders in Australia, according to a new study in PLoS ONE.

While this might be terrible news for the spider phobic among us, there’s not much to fear in the orb-weaving spider, aside from an irritating bite should you happen to blunder into one. Scientists from the University of Sydney looked at females from the species Nephila plumipes, which weave large webs that they call home throughout their adult lives. The team surveyed three varying habitats in Sydney—urban gardens and parks, remnant patches (such as vacant lots), and continuous bushland.

Measuring body size, fat reserves, and ovary weight in the spiders, the team found that spiders associated with urban development (cement, concrete, and asphalt) were significantly larger than spiders in areas with more vegetation cover. They also found that the spiders’ reproductive ability, measured by increased ovary weight, appears to increase in areas with hard surfaces or leaf litter.

Lead author Elizabeth Lowe believes that the urban heat island effect, combined with less competition for prey, allows these spiders to find success in the urban environment. Another explanation, the authors write, could be the city’s artificial lighting at night that might increase insect prey abundance.

The team calls these spiders “urban exploiters,” suggesting that the arachnids actually benefit from urbanization, which is not the case for many other organisms in the natural world. Fortunately, they likely benefit us human city-dwellers, too, eating insects and attracting birds looking for a fat spider meal.