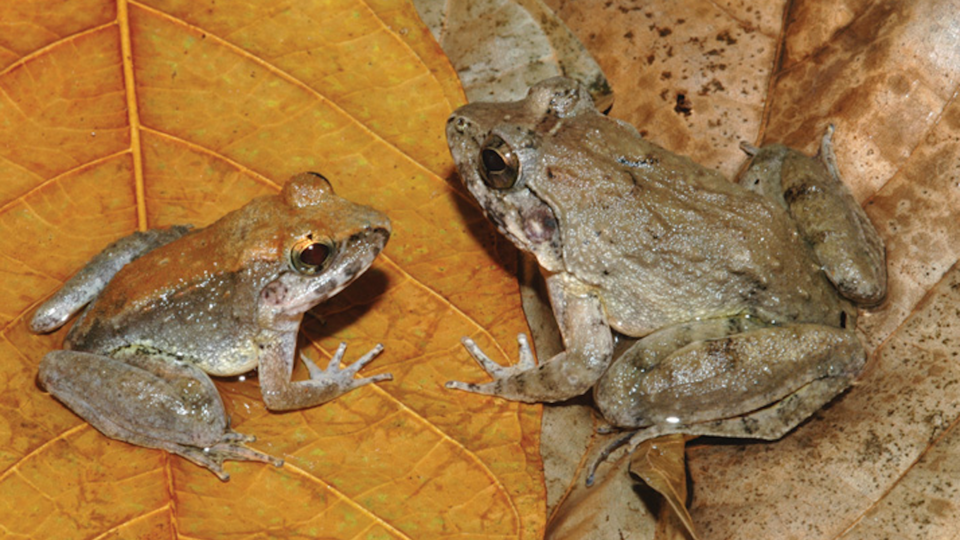 “Vivipary” isn’t a term thrown around often in maternity wards, but it is associated with you and me as animals that give live birth. It means that we have eggs (and embryos) that develop on the inside of us (well, half of us, at least), unlike creatures that lay eggs. As a child you may remember learning some clear divides between mammals that deliver babies versus birds, lizards, snakes, insects, amphibians—basically all the other animals in the world—that lay eggs. But exceptions abound: we all know the egg-laying platypus and its monotreme cousins, and we’ve even discovered that some common insects and snakes make babies like we humans. And now, we can add a new member to the vivipary club: frogs!

On the world’s eleventh largest island, Sulawesi, UC Berkeley herpetologist Jim McGuire found a tiny fanged frog that his Indonesian colleague Djoko Iskandar of the Institut Teknologi Bandung had first discovered decades ago. “I first became aware of the frog in 2001,” said McGuire. “My team collected one,” he continued, and as they prepared tissue samples, “out popped live tadpoles from the incision.” McGuire returned to Sulawesi in 2007 and found more fanged frogs. Over 100 specimens and years of research later, McGuire’s team was finally ready to announce to the world that they had something special: a new method of frog reproduction.

“Almost all frogs in the world—more than 6,000 species—have external fertilization,” said McGuire. That is, the females lay eggs and the males come along to add sperm once the eggs are out of the mothers-to-be. Confusingly, this often happens right as the eggs exit the female, so to a casual observer, it might look like the frogs’ “embrace” is similar to the way mammals make babies. Few frog species actually involve males depositing sperm inside the female, continued McGuire: “This new frog is one of only 10 or 12 species that has evolved internal fertilization, and of those, it is the only one that gives birth to tadpoles as opposed to froglets or laying fertilized eggs.”

In addition to helping us learn about frog reproduction, these studies can also help answer larger questions about biodiversity on the thousands of Indonesian islands. “Sulawesi is an incredible place from the standpoint of species diversity,” McGuire noted, due to Sulawesi’s complex geologic past and the overwater influx of species from neighboring islands. While most of the lizard species McGuire has mapped have distinct habitats, these fanged frogs have ranges that overlap, and no one is quite sure why. McGuire expects his discoveries to contribute to solving a larger puzzle, making use of genetic samples and DNA analysis, something his lab (and a few others) have already begun.