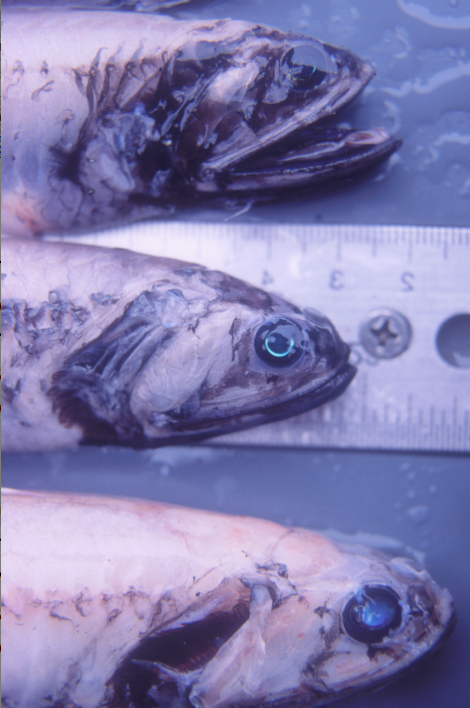 The deep ocean is a mysterious place: it’s dark, there are few plants, little to no oxygen, and it’s eternally cold. And the mesopelagic or "twilight" zone, from about 200 meters to 1,000 meters deep, is home to a diverse array of fish species about which we know very little. It’s too deep for scuba divers and deep-sea submersibles are extremely expensive, so few scientists have been able to explore this zone. As a result, mesopelagic fishes are one of the least researched components of the open ocean, with great gaps in our understanding of their biology and adaptations.

Previous studies of mesopelagic fish biomass provided an estimate of more than one billion tons of fish in the mesopelagic zone. This is an uncertain estimate, however, because different studies have yielded dramatically different results based on the methods used. To try to obtain a more accurate measurement, the researchers of the Malaspina 2010 Expedition surveyed 32,000 nautical miles of open ocean with a novel approach, with shocking results.

Spanish National Research Council scientist Carlos Duarte, the leader of the expedition, says, “Malaspina has provided us the unique opportunity to assess the stock of mesopelagic fish in the ocean. Until now we only had the data provided by trawling. It has recently been discovered that these fishes are able to detect the nets and run, which turns trawling into a biased tool  when it comes to count(ing) its biomass.”

So instead of trawling, they estimated mesopelagic fish biomass by taking acoustic measurements between 40°N and 40°S, and from 200 to 1,000 meters deep. Their results increase the estimate to more than 10 times as many tons of mesopelagic fish in the sea as were previously thought–that is, more than 10 billion tons!

Xabier Irigoyen, a researcher from AZTI-Tecnalia and King Abdullah University of Science and Technology, says: “The fact that the biomass of mesopelagic fish (and therefore also the total biomass of fishes) is at least 10 times higher than previously thought, has significant implications in the understanding of carbon fluxes in the ocean and the operation of which, so far, we considered ocean deserts.”

Mesopelagic fish swim to the shallower parts of the ocean to feed at night, then swim back down during the day to avoid predators. This behavior speeds up the transport of organic matter in the ocean, which helps remove carbon dioxide from the atmosphere by transporting carbon down to the ocean’s depths and then releasing it as feces.

The researchers say mesopelagic fish are a key link between plankton and top predators, and they play a huge role in the oxygen depletion in the depths of the open ocean.

Irigoyen says, “Their role in the biogeochemical cycles of ocean ecosystems and global ocean has to be reconsidered, as it is likely that they are breathing between 1 percent and 10 percent of the primary production in deep waters.”

Jami Smith is a science geek-wannabe and volunteers for Science Today.