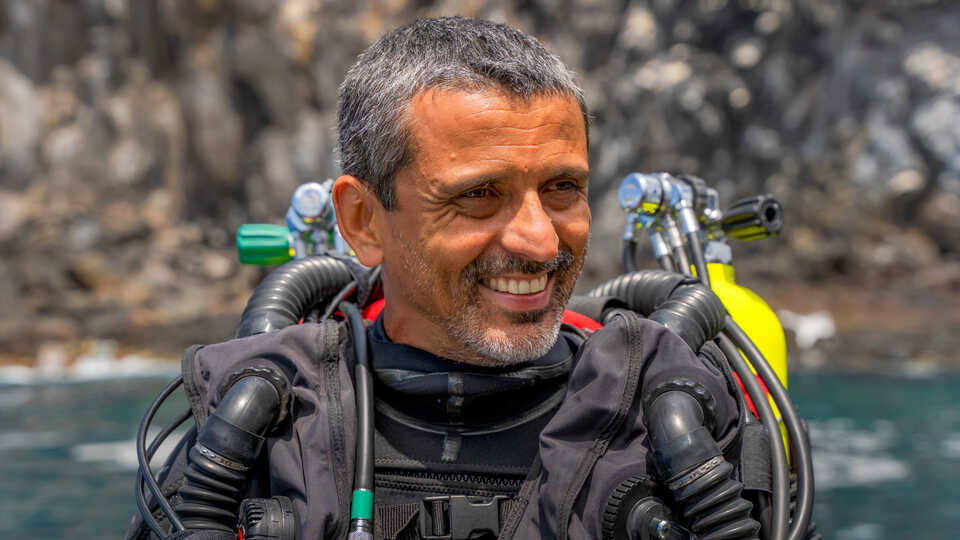 SAN FRANCISCO, CA (June 21, 2021) — Today, Rolex announced that California Academy of Sciences Curator and Follett Chair of Ichthyology Luiz Rocha, PhD, is one of five winners of the 2021 Rolex Awards for Enterprise, a prestigious award recognizing pioneers working on projects that expand our knowledge of the world, protect the environment, and improve human well-being. The award is in recognition of—and will help support—Rocha’s continued efforts to explore and conserve mesophotic coral reefs, relatively unknown deep-ocean ecosystems.

“I am honored and thrilled to be a Rolex Laureate,” Rocha says. “In addition to supporting future research efforts, the award is an affirmation of the importance of exploring and protecting these virtually unknown ecosystems.”

Rocha was selected for the award from a pool of more than 1,600 candidates by an international jury of experts, including renowned paleontologist and anthropologist Louise Leakey, environmentalist Wanjira Mathai, and San Francisco-based humanitarian Norbu Tenzing.

With the award, Rocha will be able to expand his research expeditions to the Indian Ocean where there has been little exploration of mesophotic coral reefs. He also hopes the award will increase awareness and appreciation of these unique ecosystems and the rich, unknown diversity of marine life they support.

“One of the biggest obstacles we face when trying to protect and manage deep reefs is that most people don't know about them,” Rocha says. “So awards like this have huge potential to raise the profile of deep reefs and generate public conversation about them.”

The relative obscurity of mesophotic coral reefs is partially attributable to the difficulty in getting to them. Indeed, Rocha is one of only a handful of scientists on the planet who is trained to dive to lower mesophotic depths which requires specialized rebreather equipment that scrubs exhaled breaths of carbon dioxide before recirculating the air to the diver.

While they are not as well known as their shallow-water counterparts, deep reefs play an equally important role in providing food and shelter for countless species. Similarly, they also face a myriad of threats, from climate change to ocean acidification to plastic pollution. As part of the Hope for Reefs initiative, Rocha’s research is integral to the Academy’s mission to regenerate the natural world by developing new knowledge about some of Earth’s most vibrant but vulnerable environments.

To learn more about Rocha and his award-winning research, visit the museum’s Twilight Zone exhibit or watch his recent talk on the Academy’s Breakfast Club series.

The Institute for Biodiversity Science and Sustainability at the California Academy of Sciences is at the forefront of efforts to understand two of the most important topics of our time: the nature and sustainability of life on Earth. Based in San Francisco, the Institute is home to more than 100 world-class scientists, state-of-the-art facilities, and nearly 46 million scientific specimens from around the world. The Institute also leverages the expertise and efforts of more than 100 international Associates and 450 distinguished Fellows. Through expeditions around the globe, investigations in the lab, and analysis of vast biological datasets, the Institute’s scientists work to understand the evolution and interconnectedness of organisms and ecosystems, the threats they face around the world, and the most effective strategies for sustaining them into the future. Through innovative partnerships and public engagement initiatives, they also guide critical sustainability and conservation decisions worldwide, inspire and mentor the next generation of scientists, and foster responsible stewardship of our planet.

For the founder of Rolex, Hans Wilsdorf, the world was like a living laboratory. From the 1930s, he began to use it as a testing ground for his watches, sending them to the most extreme locations, supporting explorers who ventured into the unknown. But the world has changed.

As the 21st century unfolds, the company has moved from championing exploration for the sake of discovery to protecting the planet and reinforced its commitment by launching the Perpetual Planet initiative in 2019. It supports individuals and organizations using science to understand the world’s environmental challenges and devise solutions that will restore balance to our ecosystems.

About Rolex Awards for Enterprise

The Rolex Awards for Enterprise are a pillar of Rolex’s Perpetual Planet initiative. Expressly created by the company in 1976 to commemorate the 50th anniversary of the Rolex Oyster, the first waterproof wristwatch, the Rolex Awards have so far supported the visionary projects of 155 men and women selected as Laureates. Their projects have transformed lives and communities worldwide, benefiting millions of people. As pioneers and guardians of the planet, the Laureates demonstrate Rolex’s fundamental belief in always pushing the boundaries. For more information, please visit rolex.org.