Expansive, all-digital show takes viewers across time and space in an exploration of life on our planet and beyond 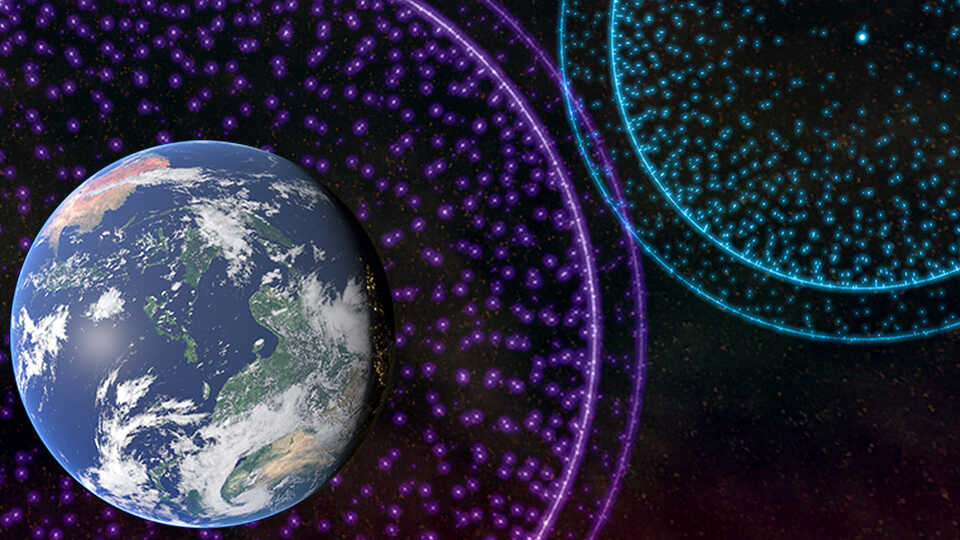 SAN FRANCISCO, CA (August 16, 2021) - Premiering November 5, 2021, the California Academy of Sciences’ newest original, all-digital planetarium show, Living Worlds, takes viewers on a revealing exploration of the ways life has transformed Earth’s surface and atmosphere over billions of years, and invites audiences to journey through the cosmos in search of life in our Solar System and beyond.

Narrated by Daveed Diggs, Living Worlds is the eighth original in-house production by the Academy’s award-winning Visualization Studio. The breathtaking, thought-provoking show carries viewers across our globe and to the farthest reaches of space in a quest to understand life as an essential quality of our home planet. Along the way, we see how light and color can help planetary scientists spot a living world, even from great distances. From the awe-inspiring expanses of space, to microscopic amoebas living high in Chile’s Atacama Desert, to the ice-covered ocean of Saturn’s moon Enceladus, Morrison Planetarium’s 75-foot dome will immerse viewers inside cutting-edge visualizations and hyper-realistic virtual environments.

“Living Worlds takes viewers on a journey to answer some of our biggest questions: How does understanding life’s influence on our planet inform our search for life elsewhere—and what would it mean to find evidence for extraterrestrial life?” Ryan Wyatt, Senior Director of Morrison Planetarium and Science Visualization at the California Academy of Sciences, continues, “To ponder these existential quandaries we dig deep into cutting-edge science, combining the expertise and research of hundreds of scientists across dozens of disciplines and leveraging simulations and data from around the globe. We hope that viewers will come away with a deeper understanding of our living world in a cosmic context, and that they will be inspired to seek an active role in regenerating life on Earth.”

Living Worlds started receiving accolades even ahead of its November 5 San Francisco premiere: on October 9, 2021, Living Worlds was named the winner of the 2021 Dome Fest West #BestOfEarth award for Science and Education. The film received a warm welcome from the industry in its Global Festival Premiere at four film festivals worldwide from October 8-10, 2021: Dome Fest West in Los Angeles; the FullDome Festival in Jena, Germany; Fulldome UK in Plymouth, United Kingdom; and at the Dome Under Festival in Melbourne, Australia.

“Living Worlds follows the odyssey of life on our planet and the exploration of its possible alien abodes beyond Earth,” says Dr. Nathalie A. Cabrol, astrobiologist and the Director of the Carl Sagan Center for Research at the SETI Institute. “It brings together attention to details and scientific rigor while always keeping it as a priority to make it visually stunning. Living Worlds is a journey through time and space, where life is both the observer and the planetary experiment now on a quest to figure out its own origin.”

Living Worlds begins the quest for life right here on Earth, in the stark, rugged Atacama Desert of northern Chile, a place with environmental conditions so extreme that scientists run experiments there to simulate trips to Mars. Yet it retains life-friendly “microclimates” that are home to a multitude of living creatures, such as the single-celled Cabrolae amoeba, named in honor of Dr. Cabrol. Zooming out to look at Earth from space, viewers are given a new lens through which to see its pale deserts, blue oceans, and green forests: these colors indicate a planet that harbors life. Using spectral data direct from astrobiology researchers, we see what colors reflected by a planet can reveal about the chemistry of its atmosphere, and we learn how, by teasing apart different wavelengths of light, we can uncover a planet’s spectral fingerprint and detect signs of life.

As we ponder what forms life might take in the Solar System and beyond, Living Worlds encourages viewers to consider how a deeper understanding of our own planet can aid in the search for life across the cosmos. We are taken back in time hundreds of millions, then billions of years—before humans, before flowers, before dinosaurs or forests—to a world that looked very different from the one we call home today. To a time when microscopic life may have plunged our entire planet into a deep freeze, land and oceans almost entirely covered over by ice and snow. This episode changed our planet forever, setting the stage for other forms of life to take hold and illustrating how Earth and the life it supports evolve in tandem.

Just as life was taking hold on Earth, Mars was losing its capacity to support abundant life. Zipping across its barren, cratered surface, viewers see evidence of hydrothermal activity that could once have provided energy for life, tour a region of sunken canyons known as Nili Fossae, and imagine what future missions to Mars might look like. From here, our journey takes us to Saturn’s moon Enceladus, going deep below its icy crust into a vast, world-spanning ocean. We envision the Exobiology Extant Life Surveyor (EELS)—a snake-like future spacecraft concept that worms its way through an icy crevasse to test the ocean’s waters for microscopic organisms.

Although Earth’s current spectral fingerprint is viewable even from many light years away, it shows a world out of balance, with signs of unnatural pollutants and escalating carbon dioxide threatening to warm our planet dangerously. As viewers are brought back to our planet, we are afforded a glimpse into a hopeful future: dry lands turn green, biodiversity flourishes, and the planet pulses with life. Living Worlds asks audiences to imagine a future in which technology enriches our planet, and to reflect on ways we can partner with our living world to regenerate and strengthen life on Earth.

Living Worlds will play everyday in Morrison Planetarium following its in-house premiere at the California Academy of Sciences in San Francisco on November 5. Later this fall Living Worlds showtimes will be available on the Academy’s daily calendar online. During every Morrison Planetarium show, a presenter will share a live update on the latest scientific discoveries and data that inform our knowledge of life in our universe and beyond.

The California Academy of Sciences is a renowned scientific and educational institution with a mission to regenerate the natural world through science, learning, and collaboration. Based in San Francisco’s Golden Gate Park, it is home to a world-class aquarium, planetarium, and natural history museum, as well as innovative programs in scientific research and environmental education—all under one living roof. Museum hours are 9:30 am – 5:00 pm Monday – Saturday, and 11:00 am – 5:00 pm on Sunday. Admission includes all exhibits, programs, and shows. For daily ticket prices, please visit www.calacademy.org or call (415) 379-8000 for more information.