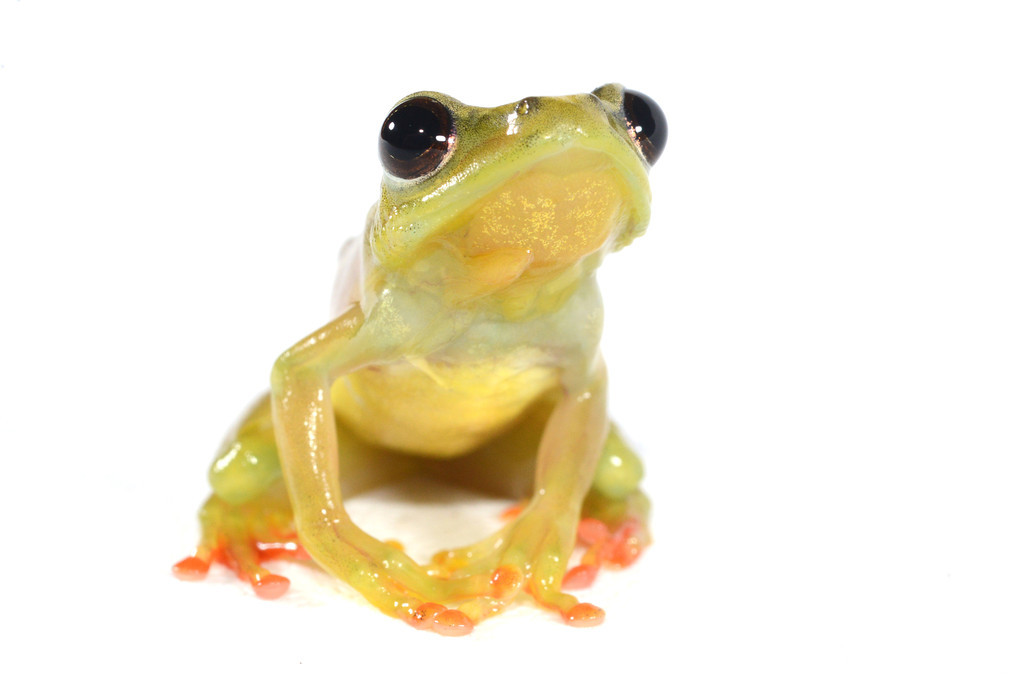 Two very different Academy scientists traveled to Cameroon together earlier this summer, in search of frogs, in a race to save them.

We’ve cited this scary number on this website before: more than one third of amphibians are at risk of extinction. These species experience many threats, mostly due to human impact, but one clear causes of frog death is the chytrid fungus. Scientists are unsure how it spreads, but the disease it causes quickly kills its victims.

Dave Blackburn, a scientist here at the Academy’s Institute on Biodiversity Science and Sustainability (IBSS), is working with San Francisco State University’s chytrid expert (and Academy fellow), Vance Vredenburg, to learn more about the spread and treatment of chytrid.

Brian Freiermuth works with the Academy’s live animals, mostly herps (amphibians and reptiles), and joined Blackburn on this unusual expedition. The two Academy scientists were joined by other students and colleagues, all looking for and collecting different samples.

“This expedition was exciting because we were conducting a lot of different types of science,” Blackburn, the expedition leader, explains. “We had four grad students with us. Two from UC Berkeley—one of them studies African frogs, the other looks at the larger ecosystem and how many frogs might live at a particular pond. One woman from the University of Texas is studying alkaloids on frogs’ skin and we also had a Cameroonian scientist who studies caecilians on the team. ”

While each team member had a very important role, Freiermuth performed a very crucial and unusual job for this type of expedition—keeping frogs alive during their journey through the country and all the way back home to San Francisco.

One of his biggest challenges was temperature since air conditioning isn’t always available or reliable in the country. “Keeping frogs alive for weeks at a time in less than ideal conditions in multiple locations isn’t easy,” says Freiermuth.  “Transporting the frogs from remote areas is hard to do because you don't have any way to keep them cool in the vehicles, which get very warm during while traveling. I packed a large number of gel packs in our Styrofoam transport box and packed the frogs in individual vials. I also set the frogs up in cages in the field, and fed them until we would move to another location.”

Blackburn and Freiermuth also worked out cozy travel back to the US for the frogs. The amphibians were allowed in the cabin on Air France.

The frogs are now in quarantine here at the Academy, and will make their home in the Steinhart Aquarium by the end of this year, on display for visitors to see. The frogs were chosen because the Steinhart biologists believe they will do well in captivity but also because these are species of conservation concern for which we know little of their biology.

And they are here for a more important mission, too. The Cameroonian frogs are part of a new initiative at the Academy focused on amphibian conservation and biodiversity education. “This new initiative will enable us to figure out aspects of the biology of these many animals that we know so little about,” Blackburn says. The idea is that the more we know, the more we can protect and sustain populations.

“One basic goal of our work at the Academy is to better understand the conditions necessary for reproduction: breeding preferences (where are the eggs laid?), tadpole biology (what type of water quality do they require?), and requirements to get through metamorphosis (how long do they take to get to metamorphose, how long do they live, how long until they first reproduce, etc.),” Blackburn continues. “We can learn more about all of the species we collected in Cameroon: Cardioglossa pulchra, Cardioglossa gracilis, Hyperolius riggenbachi, Hyperolius ademetzi and Xenopus longipes.”

Science Today will follow up with two videos this fall: one on our new initiative and one on the fight against the deadly chytrid fungus. In the meantime, you can see some of Freiermuth’s amazing photos from the Cameroon expedition here.