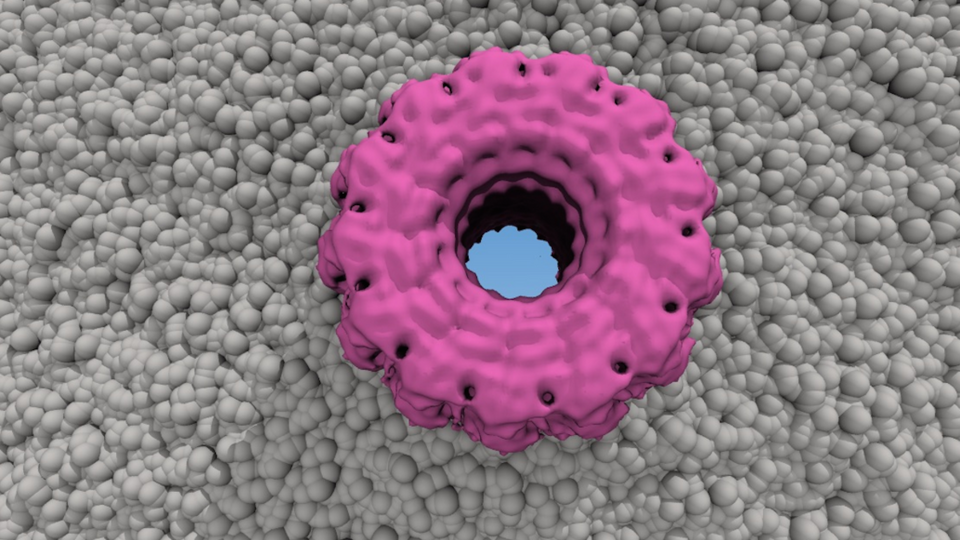 Ever heard of the FBI? No, not the suit-wearing agents—the decomposers! Fungi, bacteria, and insects play an essential role in the global food web, taking dead and dying organic material and turning it into nutrients that plants and animals can re-use. (For an incredible visualization of this process, check out our brand-new planetarium show, Habitat Earth.) But even among the FBI, there’s competition: insects and nematodes are prey to an unlikely predator, the oyster mushroom.

Wait, what? Mushrooms eating insects and microscopic worms? This actually isn’t much of a surprise to those who study these fungi—in fact, 160 different nematophagous species are known. And this week, Michelle Dunstone of Monash University in Australia and Helen Saibil of Birkbeck College in London show exactly how it’s done, using modern electron microscopes and light sources to directly image the mushroom’s proteins at work as they digest their unlikely meals.

The technique is revolutionizing the way we study the basics of life, according to Dunstone. “I never believed I’d be able to see these proteins in action,” she says, referring to the mesmerizing video made from their data. Although toadstools aren’t close to humans on the tree of life, the researchers believe that the protein they saw in action may closely resemble a similar structure inside your cells or mine. “We’re particularly interested in this family of proteins in humans, especially perforin, which we believe will behave in the same way,” she says.

Perforin is used by our immune system to punch holes in the cells of invaders, allowing digestive proteins to sneak in and eliminate the infection. The mushrooms use a close relative called pleurotolysin to create openings in the cells of its prey, so it can digest the animal tissue and use the nutrients for food.

The deep understanding revealed by this paper in PLoS Biology might help doctors reduce the effects of overactive immune systems—for people with some autoimmune diseases, for example. It might also allow new drugs access to the interior of bacterial cells by co-opting perforin’s mechanism, or prevent the same bacteria from entering human cells. It could even have agricultural uses, because pests use similar mechanisms to get inside plant cells.

Of course, these applications are a long way off. “We still have a lot of work to do before our ideas reach the clinic or industry but seeing how the machinery works is an important step forward,” says Dunstone’s co-author Saibil. But every piece of the molecular puzzle of nature helps us inch forward to new discoveries and opens the door to exciting developments: no mushroom, nematode, or protein is too small to be left unstudied!