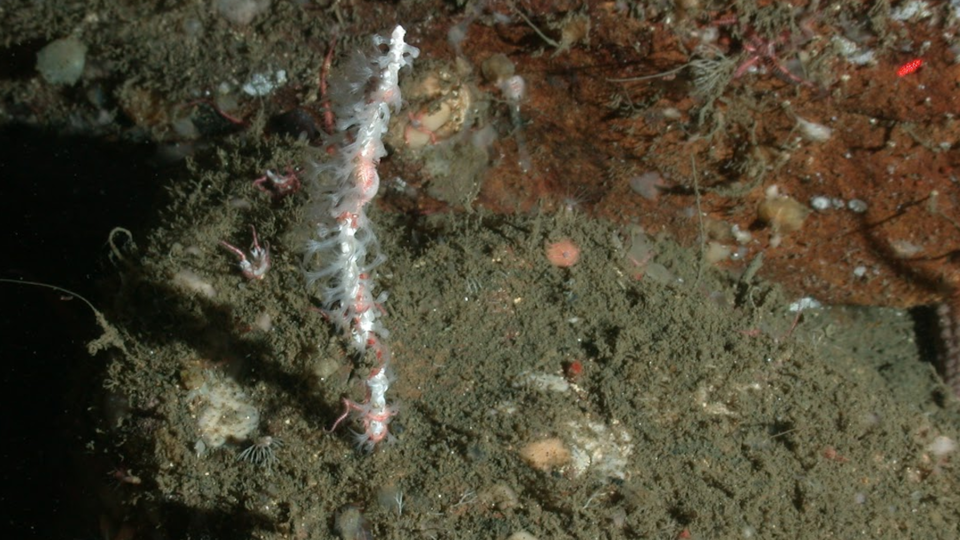 It doesn’t have a name, it lives six hundred feet below the ocean’s surface, and last month, we didn’t even know it existed. But thanks to the California Academy of Sciences’ own Gary Williams, we now know of a new species of coral in the Gulf of the Farallones National Marine Sanctuary.

Until recently, an underwater region affectionately known as “the Football” north of San Francisco has only been mapped with sonar. But recently, scientists used small submarines with video cameras to explore deep under water. Some results were surprising—hundreds of skate eggs unusually close to a shark nursery, for example. But new species were anticipated, as the team of researchers knew this area was rich in nutrients and could support a large and diverse number of species.

“We did this in 2012 in an area south of there so we expected more of the same—this was a little different because the geology is such a mosaic,” said Williams. “You go a few miles and the geology is really different.” Different geology means different species: not everything likes to live on the same rocks, or even on the same sand. Williams knew he was looking at a unique find when he saw something that looked like the deepwater corals called sea pens.

“All of a sudden there was some rocky habitat,” Williams said, recalling the live video feed sent back by the submarine. “Wait a minute—sea pens don’t live on rocks, let’s have a closer look!” His colleague, Peter Etnoyer, a marine ecologist from NOAA, suggested that they use the submersible’s robotic claws to get a sample. “This little hand comes out and grabs the specimen. We were very lucky, it came up in one piece, not damaged at all,” Williams said.

They knew it was unusual, but they couldn’t assuredly say it was a new species. “In order for me to figure out what in the world that thing is we take a little bit of coral material in bleach and that separates the spicules, the fingerprint of the corals.” The next, somewhat tedious step was to compare the specimen with the literature—all the literature. After extensive comparisons and a lot of time with a microscope, Williams concluded that what he had was a brand new species.

We often associate diversity of species with coral reefs, as well as a diversity of colors: movieshave taught us that coral habitats are often neon shades of highlighter markers and Miami Vice pastels. But, like their sea jelly cousins, individual coral (called polyps) are actually clear when not paired with a special cooperative algae that use the sun’s energy to make food in exchange for the safety of a reef. Deep under the sea, there’s no sun to be had, so the coral live without their colorful algal friends. The same is true for this new species: called a “white coral,” the polyps live in relative darkness and have little to no color at all.

“Discovery is an always an exciting thing,” continued Williams. “To me the thing that strikes you as strange is that we’re only a few miles off one of the world’s great urban centers, and there’s so much new in our backyard that we don’t even know about.”

The superintendent of the Farallones Sanctuary, Maria Brown, remarked on the value of this research: “Deep-sea corals and sponges provide valuable refuge for fish and other marine life. Data on these life forms helps determine the extent and ecological importance of deep-sea communities and the threats they face. Effective management of these ecosystems requires science-based information on their condition.” Williams agreed: “If you want to protect fisheries, which is what NOAA does, you want to protect the deep sea coral reefs as well.”

Are there more coral species to come? Williams is confident. “Unless you look at every square foot of the face of the earth you could miss it by a few feet.” There are 12,843 square miles covering five marine sanctuaries on the west coast of the United States, so stay tuned for the next new coral species or shark habitat, to say nothing of the deep-sea surprises we have yet to encounter.

Dan Brady is a planetarium presenter and contributor to Science Today at the California Academy of Sciences. He earned his BS in Physics from UCLA and has taught science since 2008.