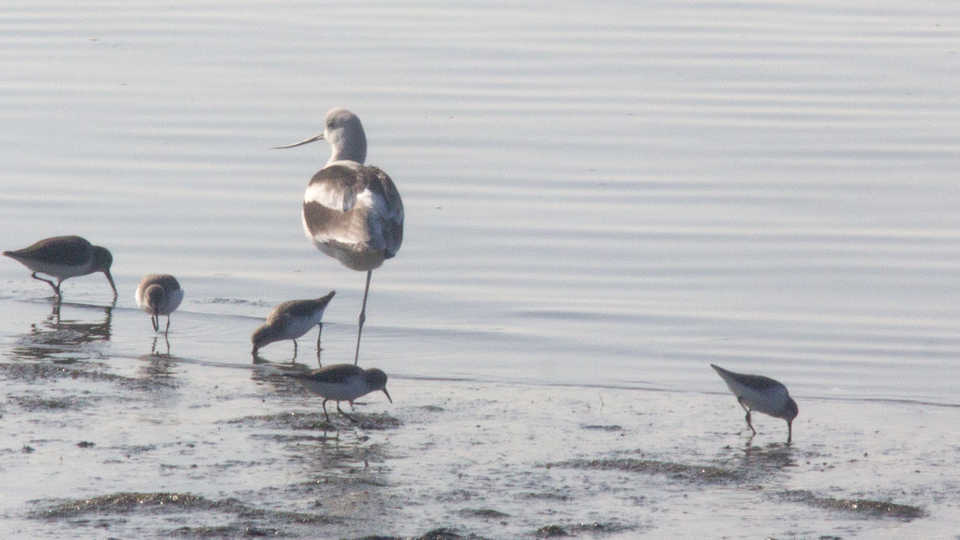 Habitat Earth, the new planetarium show opening next month here at the California Academy of Sciences, demonstrates the interconnectedness of nature, and how humans are part of that nature, too. The production is rooted in real science and data, with a large team of researchers advising the crew on the story, sights, and even sounds presented in the show. Over the next month leading up to the show’s opening on January 16, Science Today will feature some of those scientific advisors, and the work they do in the show and beyond.

Jack Dumbacher, the Academy’s Curator of Ornithology and Mammalogy, provided key data and feedback for two parts of the program—the opening scene in the Port of Oakland’s Middle Harbor and the forest scene in the middle of the show. (To learn more about the north coast forest represented in the show, read our post next Tuesday about the work of UC Berkeley’s Mary Power.)

As busy as the Port of Oakland is, San Francisco Bay remains one of the largest bird estuaries along the coast of California, Dumbacher says. With the wetlands that encompass the Bay, the region is full of hundreds of thousands of diverse populations of birds in the winter. The opening scene features pelicans, western sandpipers, sanderlings, dunlins, curlews, and Forster’s terns, all rendered carefully and accurately by our talented visualization team here, with feedback from Dumbacher.

The forest scene includes tall Douglas-fir trees, fungi, and the invertebrates and microbes that inhabit the soil, but very few birds. The soundtrack, however, includes bird songs and calls that would be present just beyond the field of view, including Steller’s jays, sparrows, and a chickadee or titmouse, and Dumbacher provided the information about the species and sounds. “It’s subtle, but makes you feel like you’re in the forest,” he says.

Dumbacher is attached to work like this because it’s so vital to get this message out to a larger audience. “We talk about biodiversity and people’s eyes glaze over. They don’t know what it is or why it’s important,” he explains. “Although it is difficult to explain what biodiversity is or why a diverse environment is important, the planetarium can tell that story so beautifully—it is the perfect venue for such a complex scientific concept.

“With the number of extinctions, declines, and changes that we will see in our lifetimes, it’s important to understand how animals are related to each other, and how intricately connected everything is. We’re connected, too. Humans are a part of nature, and nature is part of us.

“Although it is difficult to explain what biodiversity is or why a diverse environment is important, the planetarium can tell that story so beautifully,” he continues. “It is the perfect venue for such a complex scientific concept.”

He also wants the audience to understand that nature isn’t something far away—it surrounds us, even in a large city or metropolitan area. He likens our backyards, parks, and other green spaces to fragmented forests in other places. And like fragmented forests and natural habitats in remote locations, we should work just as hard to protect and conserve our local lands here, for the native plants and animals that live there are our biodiverse neighbors.