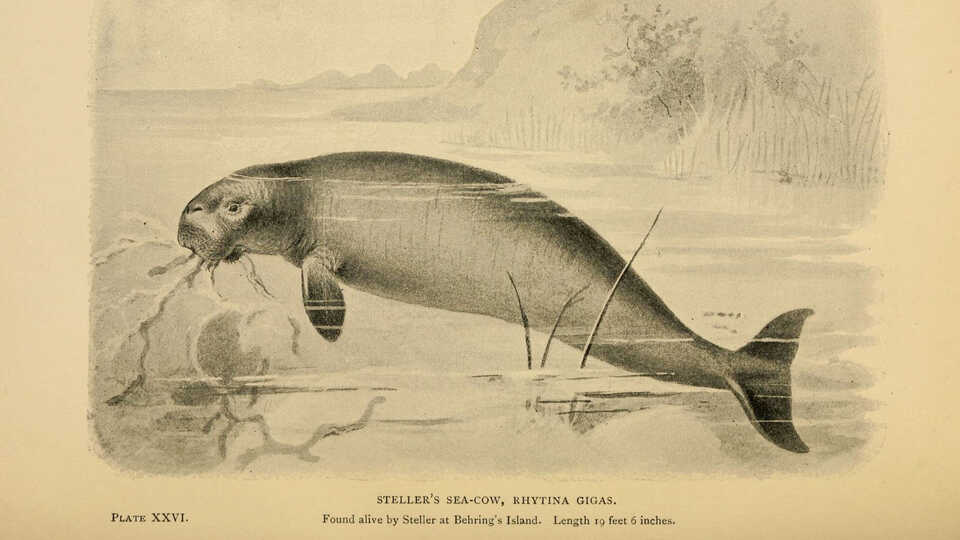 A drawing of a Steller's sea cow, an extinct marine megaherbivore. (Biodiversity Heritage Library, CC BY 2.0, via Wikimedia Commons)

SAN FRANCISCO, CA (November 28, 2022) — For millions of years, the Steller’s sea cow, a four-ton marine mammal and relative of the manatee, shaped kelp forests along the Pacific coast of North America by eating massive quantities of kelp fronds from the upper canopies, thus allowing light to spur productivity in the understory. In a paper published today in Frontiers in Ecology and Evolution, researchers from the California Academy of Sciences—as part of the Academy’s Thriving California initiative—reveal what historical kelp forests may have looked like in the presence of the marine megaherbivore, which went extinct in the 1700s just 27 years after its first encounter with Europeans due to overhunting, and suggest how kelp forest conservation efforts can take its absence into account.

“Kelp forests are highly productive ecosystems. They act as storm buffers, are economically important for fishing, and are home to countless marine organisms, yet they are in steep decline throughout the Pacific,” says study author and Academy Curator of Geology and Invertebrate Zoology Peter Roopnarine, PhD. “When kelp forests were evolving millions of years ago, there were large marine herbivores like the Steller’s sea cow, which are now extinct. So when it comes to what’s driving their widespread decline, there might be a major component we’re missing.”

This tendency to evaluate the state of modern ecosystems based on their recent past is known as shifting baseline syndrome and can obscure how an ecosystem may have existed over much longer periods of time.

“We already see the consequences of this thinking with things like wildfire management,” Roopnarine says. “In the short-term, wildfires have been seen as something to suppress because of the damage they bring to forest ecosystems. But recently we have learned that, in the long run, wildfires are a natural part of those systems that can lead to healthier, more resilient forests.”

In the paper, the researchers propose—and advocate for—a new way of evaluating the overall health of ecosystems to avoid the pitfalls of shifting baseline syndrome, called the Past-Present-Future (PPF) approach.

As opposed to evaluating an ecosystem based on its current state, the researchers say the PPF approach, which combines historical lines of evidence from museum specimens and the fossil record with Indigenous traditional ecological knowledge and modern scientific data, can lead to mathematical models that more accurately depict natural systems. Importantly, these models can then be operationalized for more effective conservation.

"Today, we are surrounded by severely degraded ecosystems, places that were far healthier a mere century ago, let alone a millennium or more,” says study author and Academy Executive Director Scott Sampson, PhD. “Growing numbers of these ecosystems are now in danger of collapse, even if we protect them. So if we are to help guide a given place toward a flourishing future, we must understand not only its current state of health, but past states as well, and then apply these insights toward calculated, regenerative interventions. This Past-Present-Future approach to conservation has the potential to be revolutionary."

To get a better picture of kelp forests of the past—and therefore a better baseline from which to compare against the state they are in today and predict how they might change in the future—the researchers built a mathematical model using historical and modern data to simulate how the ecosystem might respond under different scenarios.

Once the researchers refined the model, they were then able to explore how the Steller’s sea cow impacts kelp forests by adding them to the model and seeing how the ecosystem responded over time.

“One of the more important and surprising findings was that including the Steller’s sea cow resulted in a totally different type of kelp forest,” says study author and postdoctoral researcher at the Academy and the University of Nevada Las Vegas Roxanne Banker, PhD. “Instead of kelp-dominated, which is what we think of with modern forests, the sea cow’s presence and predation of the upper canopy would have resulted in more of a balance between kelp and algae as more sunlight would have reached the sea floor.”

Banker adds that this finding is of particular significance when reflecting on the current state of kelp forests, which are heavily degraded due in part to overpredation from sea urchins. “Algae would provide an additional food source for urchins, potentially reducing their impact on kelp,” she says.

The study also showed that when the sea cow was present, the kelp forests as a whole were often more resilient: Even under adverse conditions, such as ocean warming or disease outbreaks, kelp forests may have been less likely to transition to the barren urchin-dominated state that is often seen today, and when they did they more quickly recovered to a forested state. This effect, which the researchers dubbed the “sea cow effect,” provides actionable insights for current kelp conservation efforts.

“If our model was further validated through experimentation on test plots, it could allow us to build more resilience into kelp forests by modeling the efficacy of different interventions,” Roopnarine says. “Selectively harvesting the upper fronds of the kelp canopy, for instance, to recreate the role that was lost with the Steller’s sea cow.”

The California Academy of Sciences is a renowned scientific and educational institution with a mission to regenerate the natural world through science, learning, and collaboration. Based in San Francisco’s Golden Gate Park, it is home to a world-class aquarium, planetarium, and natural history museum, as well as innovative programs in scientific research and environmental education—all under one living roof. Museum hours are 9:30 am – 5:00 pm Monday – Saturday, and 11:00 am – 5:00 pm on Sunday. Admission includes all exhibits, programs, and shows. For daily ticket prices, please visit www.calacademy.org or call (415) 379-8000 for more information.

The Institute for Biodiversity Science and Sustainability at the California Academy of Sciences is at the forefront of efforts to regenerate the natural world through science, learning, and collaboration. Based in San Francisco, the Institute is home to more than 100 world-class scientists, state-of-the-art facilities, and nearly 46 million scientific specimens from around the world. The Institute also leverages the expertise and efforts of more than 100 international Associates and 450 distinguished Fellows. Through expeditions around the globe, investigations in the lab, and analysis of vast biological datasets, the Institute’s scientists work to understand the evolution and interconnectedness of organisms and ecosystems, the threats they face around the world, and the most effective strategies for ensuring they thrive into the future. Through deeply collaborative partnerships and innovative public engagement initiatives, they also guide critical conservation decisions worldwide, inspire and mentor the next generation of scientists, and foster responsible stewardship of our planet.